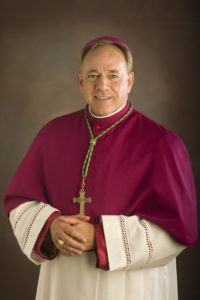 Archbishop Michael Miller, chief shepherd of Vancouver’s 430,000 Catholics since January 2009, has been part of the city’s religious landscape since 2007, when Pope Benedict XVI named him Coadjutor Archbishop.

Besides English, Archbishop Miller is fluent in Spanish, Italian and French. He is a specialist on the papacy and modern papal teaching, about which he has written extensively, and has received seven honorary doctorates.

Since his arrival in Vancouver, he has established new offices at the John Paul II Pastoral Centre for First Nations Ministry, Ecumenism and Interfaith Relations, Communications, Development, and Stewardship.

As well as his positions as Chancellor and board member of St. Mark’s College and Corpus Christi College, Archbishop Miller is president of the Catholic Independent Schools of the Vancouver Archdiocese, sits on the board of governors of Catholic Pacific College, and is a member of the Providence Health Care Society.

The Risen Lord shines upon our world torn by a savage war in Ukraine and upon a nation seeking healing and reconciliation with its Indigenous Peoples. With the Resurrection, God’s love has flooded with light Jesus’ dead body, transfigured it, and made it pass from this life into eternal life. Jesus didn’t return to His…

Easter Message from the Archbishop

“I have risen and I am with you still.” May these words resound in our hearts this Easter! Jesus completed his journey in the tomb, as all of us will, but He conquered death. By an act of pure love, the Lord opened His grave and rose from the dead. Despite all the suffering, mourning…

Letter from the Archbishop to all the faithful of the Archdiocese

Dear Brothers and Sisters in Christ: I pray that your Lenten Season has begun well and that it will be a source of many blessings for you and your family. As you know, on November 19, 2020, the Provincial Health Officer, Dr. Bonnie Henry, issued an Order which included a prohibition on religious gatherings for…