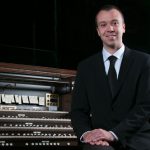 French-born Canadian organist Jean-Willy Kunz is the Montreal Symphony Orchestra’s first organist in residence. In addition to playing both with the orchestra and in concert, he is responsible for the development and showcasing of the orchestra’s new four manual, 116 rank, 6489 pipe Casavant organ in their home venue, Maison symphonique de Montreal.

He has been a prize-winner at a number of organ competitions, including the Canadian International Organ Competition in 2011. His most recent performances include concerts with the Montreal Symphony Orchestra, the Quebec Symphony Orchestra, saxophonist Branford Marsalis, and singers Rufus and Martha Wainwright. He is organ professor at the Montreal Conservatory of Music and artistic director of the Canadian International Organ Competition.

His concert will include transcriptions for organ of works by famous composers, as well as improvisation.

Camille Saint-Saens: The Carnival of the Animals

This concert is a co-production with the Royal Canadian College of Organists and the Canadian International Organ Competition.